ON THE TOWN: A Story of Ballet, Battle, Broadway, and a Blockbuster

ON THE TOWN: A Story of Ballet, Battle, Broadway, and a Blockbuster

On the Town—the “New York, New York” musical! A fast favorite since 1944, the making of this Broadway hit is a story in its own right. While many musical theatre and movie buffs already know and love the film adaptation, they may not realize this was actually the third iteration of the story. The Broadway musical was the second. Which brings us to our first subject: ballet! 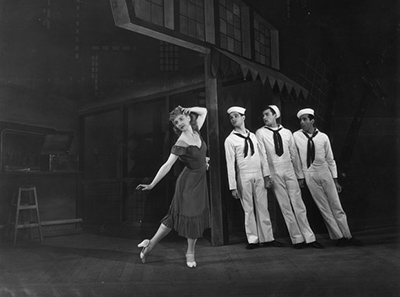 Fancy Free premiered on April 18, 1944 at the Metropolitan Opera House in New York City. It was conceived and choreographed by Jerome Robbins and set to music by Leonard Bernstein. The story follows three sailors on leave in New York City, where they vie for the attention of two women at a bar. The competition gets fierce and comes to blows, scaring away the two women. Once the conflict is resolved, a new woman enters the scene and the sailors take off after her. Though a simple plot, the ballet was an absolute hit. A business partner convinced Robbins and Bernstein to adapt the ballet into a musical. They brought in their friends Betty Comden and Adolph Green to write the book and lyrics and just like that, On The Town was well on its way! Let’s talk Broadway!

Within nine months, Fancy Free had premiered and On The Town had been written, rehearsed, and opened on Broadway. Comden and Green, the pair that wrote the book and lyrics, were cast as Claire and Ozzie. They had cast Kirk Douglas as Gabey but later replaced him with John Battles when Douglas developed psychosomatic laryngitis. They secured funding for the Broadway production through MGM studios in exchange for the rights to produce a film adaptation. The opening of this production is a fantastic example of the right story at the right time. Which brings us to our next subject: the Battle of the Bulge.

The Battle of the Bulge

In order to understand just how much timing may have helped the success of this musical, it’s important to have a basic understanding of the Battle of the Bulge. It was Germany’s last major offensive on the Western front, and after their defeat, they spent the rest of WWII in retreat. Why is this important? This battle began on December 16, twelve days before the opening night of On The Town. The headline from the New York Times from the day this show premiered can give us a good idea of what was on the average American’s mind at the time: “Our Troops Rebound to Hammer at the German Bulge.” Victory was in sight. The end of WWII seemed near. And that same day, audiences flooded into the Adelphi Theater to see three American sailors have a night of adventure and love. The sense of community and hope for the future must have been palpable amidst the excitement of opening night. Of all the “Golden Age” Broadway hits to premiere on this night, On The Town was arguably the perfect show for this moment in time. WWII ended the following year on September 2, 1945. On The Town closed shortly after that on February 2, 1946. But it was so well loved that it lived on in a third medium: film! 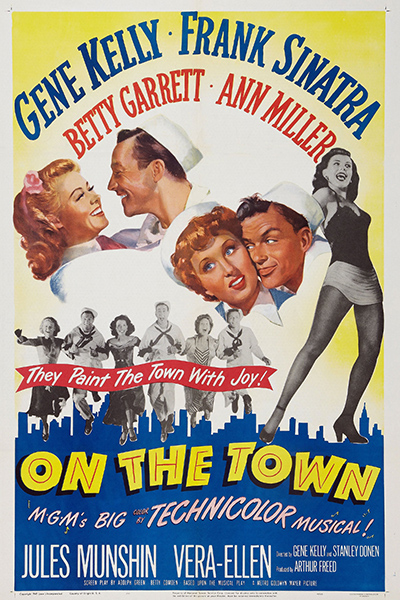 Not long after the end of WWII and the original production of On The Town came the film adaptation. It premiered in New York City (of course!) on December 8, 1949. The cast was packed with big names, such as Gene Kelly (Gabey), Frank Sinatra (Chip), and Vera Ellen (Ivy). It was directed by Gene Kelly and Stanley Donen, and the screenplay was written by—you guessed it—Betty Comden and Adolph Green. To no one’s surprise, it was a wildly successful movie. It premiered at Radio City Music Hall, and the line to get into it was the largest in the theater’s history. At the time, this movie was the second-largest grossing in MGM history, second only to “Meet Me in St. Louis” (1944). It generated a profit of $474,000, which is the equivalent of over $5.6 million today. It was also the first musical feature film to be shot on location! One last fun fact for you: Robert B. Williams, the actor who plays the police sergeant in Car 44 during the chase, is the same actor who played the policeman who chased Gene Kelly off the street at the end of the song “Singin’ in the Rain.”

On The Town has more than earned its place in musical theatre canon. It was the story we needed in 1944, a story we loved in 1949, and a story we at South Bay Musical Theatre are excited to revisit today. Of course we turn to this “helluva” show for the beautiful music and hilarious script, but there’s more to it than that. We recognize and honor the legacy of this story and its impact on American audiences, the evolution of musical theatre, and its history of compassion, community, and creativity in the face of fear.

We can’t wait to share our production of On The Town with you!

You can purchase tickets here.

We’d like to extend our sincere thanks to the NYC Parks Photo Archive for sending us 75 images to help with the dramaturgy for our production. You can learn more about this archive through the NYC Parks and Recreation Department here. 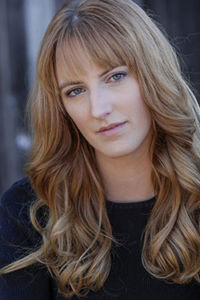 Laura Anne Millar recently joined SBMT as Program Manager. She has been an actor, dramaturg, director, and teaching artist in the Bay Area for the last 10 years. She is so excited to be the dramaturg for On The Town. She was a national awardee for the Kennedy Center American College Theater Festival and returned to the Kennedy Center as a dramaturgy assistant for their new play intensive. Over the pandemic, she adapted to the Zoom theater model as the dramaturg for Rhinoceros and Mr. Burns. If you’re wondering what a dramaturg does, there’s no short answer. In a production setting, the bulk of the dramaturg’s work is contextualization, analysis, and community outreach. Dramaturgs help bridge the gap between the script and the production team, and between the production and the audience. 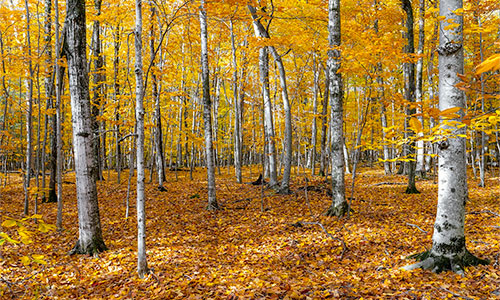 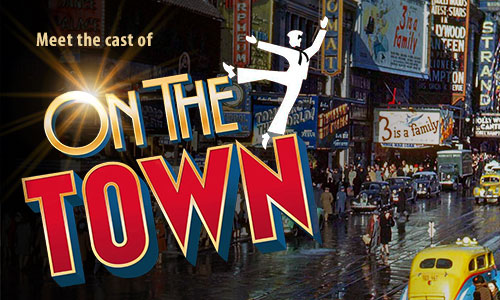 Meet the cast of On The Town Gallery

Meet the cast of On The Town 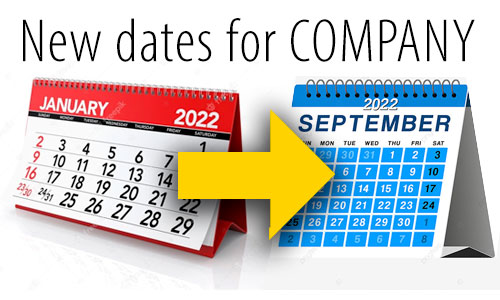