South Bay Musical Theatre is both an award-winning and award-giving company. For three consecutive years, we have been voted among the “Best of Silicon Valley” by the readers of Metro, and have consistently earned “Recommended Production” honors from Theatre Bay Area.

Best of Silicon Valley Awards include:

Compiled below is a comprehensive history of the special awards SBMT has presented to outstanding contributors in various categories. Awards are presented at the end of each season and after the final dress rehearsal for each show. (Click on the awards for a list of past honorees.) For recent stories about our award winners, visit our blog. 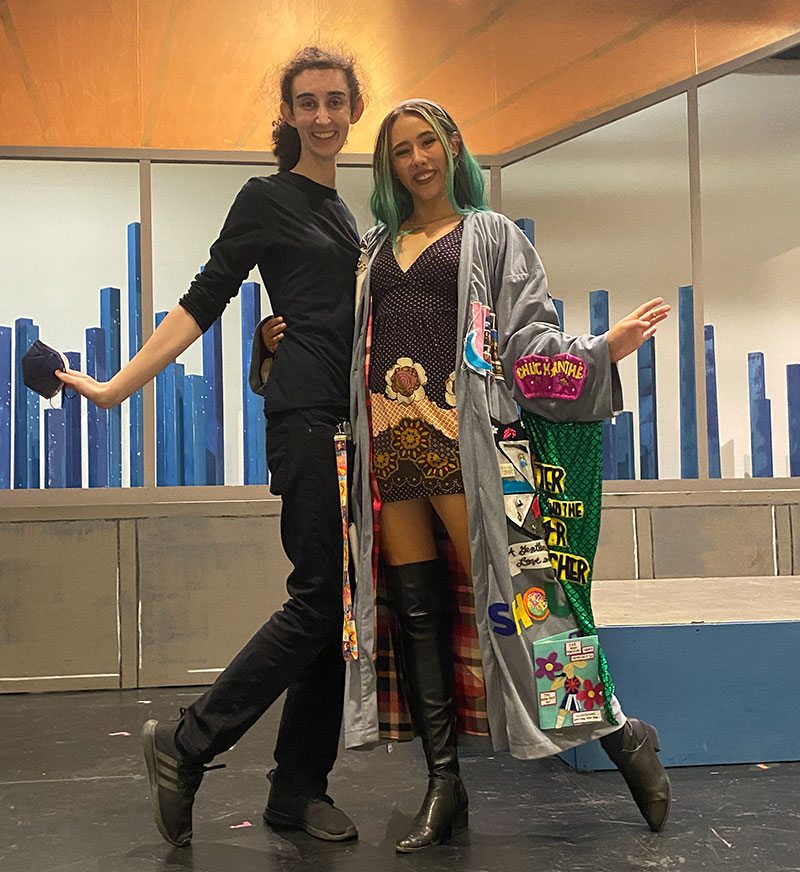 SBMT has traditionally made a presentation of the “Legacy Robe” during each show. The robe is given to the member of the chorus who has made an outstanding contribution to the production and cast. The presentation takes place following the Preview Night performance, and is awarded by the show’s Director, with the previous robe recipient coming back to pass the robe along to its new owner. The awardee is challenged to give all cast members a good luck hug prior to opening night, and when the show has completed its run, he or she decorates the robe with a symbol of the production. This award, formerly known as the Gypsy Robe, was renamed by the SBMT Board of Directors in 2019, following a similar move by Broadway and Actors’ Equity. (Pictured: Cordelia Larsen, winner of the Legacy Robe for Company, and Anastasia Helfinstein, winner of the Michael Munoz Technical Award.)

Marion Drew was, for many of the early years of SBMT, our very own “pianola girl.” She loved theater and playing piano for both auditions and performances, and her smile and humor would always make YOU smile. This award is given during each show to an outstanding orchestra member, not only for technical proficiency, but for an infectious and positive attitude toward making the orchestra, and its role in the production, happy and successful.

A long-time contributor to SBMT, BoBo Reardon was known for her upbeat attitude and spirit of welcome for newcomers into the SBMT Family. Her unflagging positive energy, even when the situation was difficult or tense, always brought a sense of “fun” into the community theater experience. This award is given during each show to an SBMT first-timer, whether it be cast or crew, in recognition of an outstanding positive contribution to the show and the people involved in the show.

Mike Muñoz, who passed away May 7, 2022, was a well-known member of the South Bay theatrical community. He served as lighting designer for dozens of shows at the Saratoga Theater, and in fact personally owned many of the lighting instruments we used to bring our shows to life until the theater was revamped with LED lights in 2021. SBMT’s Board of Directors voted in May 2022 to retire the Harriette Hill Technical Award and establish a new one in Mike’s memory. This award is presented to the person who has made an outstanding technical contribution to a particular production, in any or all fields: lighting, costumes, sets, props, production assistance, sound and/or stage crew.

Roberta Savage was one of SBMT’s longest-serving and most dedicated members. She was part the team who founded the company (as Saratoga Federated Drama Group) in 1962, and was active both on and off stage in nearly every production for over 50 years. Roberta frequently volunteered to be a producer, which meant overseeing all aspects of the production to ensure everything got done—one of the hardest jobs in theatre. She never hesitated to take on a task in service to the show, and the Roberta Savage Producers Award honors that commitment. It is given to a company member who has gone “above and beyond” their role and responsibilities to make SBMT’s theatre magic happen. 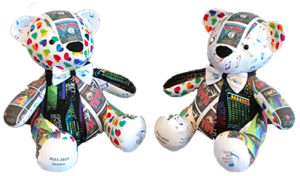 The Howard Miller “Bless Your Heart” is in honor of long-serving SBMT member Howard L. Miller, who passed away on Christmas Eve, 2018. It recognizes the contributions of members who, like Howard himself, truly embody the soul and spirit of our community organization. Howard’s warmth and loving nature made him a pleasure to be around, and his dedication to SBMT inspired many talented people to join and become long-term members. Howard worked with SBMT for 20 years, beginning with his performance as Max/Gorilla in our 1998 Cabaret. He went on to perform in numerous other shows, but was just as active off-stage as a director, producer, board member, and the group’s treasurer. He was always ready to greet fellow members with a hug and a smile, and had a penchant for the sweet expression, “Bless your heart.” Howard’s devoted friends and family were heartbroken at his early passing at the age of just 46. Howard’s husband summed it up by saying, “Howard had three families: his biological family, his bear community family, and his SBMT family. And in many ways, his SBMT family was the most important to him.” The Howard Miller “Bless Your Heart” Award recognizes other SBMT members who foster that same sense of love and family in our organization. A memorial teddy bear, the “Howie” bear, is passed from recipient to recipient each year in memory of this very special individual. (More details)

Fred Hassett was instrumental in establishing South Bay Musical Theatre from the early beginnings of the group when it was associated with the Saratoga Federated Church. He helped to put the group on the map and he continued his support until his death in 2004. The Fred Hassett award is presented each year to the SBMT member who has contributed the most to the growth of the group.

The recipient of the Barbara Weaver Special Award of Merit is approved by the Board after being nominated by a senior staff member. It need not be presented for each show, but is presented only very occasionally to recognize extraordinary talent and contribution. It often goes to a staff member and is awarded to someone who has shown both an exceptional amount of creativity and extraordinary commitment to task in an area that made a real difference in the success of the show. The award was named for Barbara Weaver, who always was a very strong supporter of SBMT and its members. She had an infectious sense of fun and organized many informal social activities for the members, and was often the first to arrive and the last to leave.

The silver jackets were instituted in the early 1990’s as a thank-you to various individuals for their service (mostly volunteer) in a capacity to SBMT over an entire season or seasons. Awarded once a year, all the recipients’ shows were once embroidered on the jackets, but the winners began having so many SBMT shows to their credit that the jackets are now simply adorned with their name. The amount of recipients each year varies and the jackets are worn by all the recipients on the evening that the new jackets are awarded.

Joanie was one of the earlier members of SBMT. Forever smiling, forever laughing, forever working at any capacity just for the fun of it. She and husband Laverne were one of the many hard-working couples who helped start SBMT and truly reflected the “community” in community theater. Joanie would find something positive about every show she saw and every person she met and, on the rare occasion when she wasn’t working on an SBMT show, she’d be there opening night and pitch right in and help. This award is given, during almost every show, to a person, who, throughout many seasons, has made a valuable contribution to the group in any and all capacities.

Another early member of SBMT, John Houck was known for welcoming new folks into the group. He would make it a point to introduce them around and make them feel at home. This award is given during each show to an SBMT first-timer, whether it be cast or crew, in recognition of an outstanding positive contribution to the show and the people involved in the show.

Harriette Hill, another founding member, not only performed onstage but did everything from sewing costumes, to building props, painting sets, and managing the house. This award is presented to the person who has made an outstanding technical contribution to a particular production, in any or all fields: lighting, costumes, sets, props, production assistance, sound and/or stage crew.

Carol was a dancer. With the biggest smile you’ve ever seen. She loved performing onstage and it showed in her performances. She was almost the “heartbeat” of every show she was involved with and was always positive and eager to help. She was also known to have a very large collection of stuffed teddy bears. This award, along with one of her favorite bears selected by her husband Burns, is given each year to the person who reflects the same friendly and helpful values that Carol did. Traditionally, the previous winner announces the current winner and presents him/her with the bear as well as the plaque.

Bob McKay was a popular area character actor in the early and mid-days of SBMT. He represented the camaraderie and friendship of the generation which founded the group, and worked in many production capacities besides acting. This award is given, during almost every show, to a person, who, throughout many seasons, has made a valuable contribution to the group in any and all capacities.