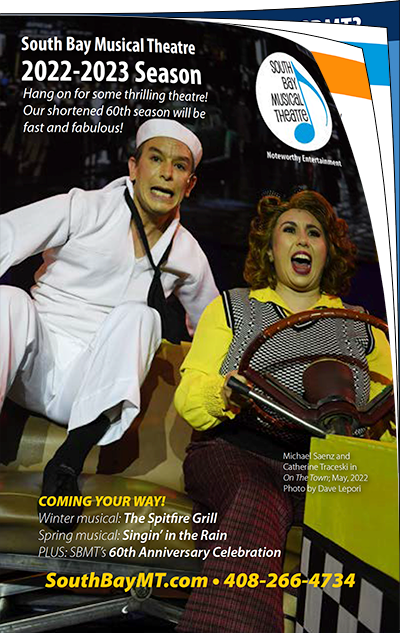 “Come Up To My Place”

South Bay Musical Theatre invites you to come up to “our” place — The Saratoga Civic Theater — for our fabulous 60th anniversary season! The two-show season kicks off with The Spitfire Grill January 28 to February 18, 2023 and concludes with Singin’ In The Rain May 13 to June 3, 2023. There will be no fall show as part of Season 60 because that slot is occupied by the COVID-delayed production of Company, held over from last season.

For more info about the 2022-23 season, download a season brochure (view on desktop) (view on mobile)

Watch our 85-second video teaser below for samples of the songs you’ll hear this season.

Want more info? Keep up-to-date on our latest shows and events by signing up for our mailing list here or call our box office at 408-266-4734.

Subscribe to our two-show package and save up to 25% over the price of single tickets!

Total flexibility: Can’t make it to a performance? Swap your tickets for an equally priced future show—free of charge.
Best seats in the house: Like Sunday matinees? Aisle seats? Subscribers get first choice of popular dates and seats.
Guaranteed availability: Our shows often sell out. By subscribing, you lock in your favorite seats—at the best prices.

1. Fill out and send in our New subscriber order form  OR

Jan. 28 – Feb. 18, 2023
Music and book by James Valq. Lyrics and book by Fred Alley. Based on the award-winning 1996 film by Lee David Zlotoff. Winner of the Richard Rogers Production Award for new musicals.

Percy Talbott is a woman with a past looking for a fresh start. She finds herself in rural Gilead, Wisconsin, working at THE SPITFIRE GRILL, but learns that being the new kid in town can be its own form of prison. Through determination, grit, and remaining open to possibilities, Percy revitalizes the grill and, in turn, the community. Debuting Off-Broadway in 2001, The Spitfire Grill struck a powerful emotional chord with both audiences and critics. Two decades later, this heartfelt musical’s message of about healing the wounds of the past, finding joy in the present, and optimism for the future still resonates.

Singin’ In The Rain

The “Greatest Movie Musical of All Time” is faithfully and lovingly adapted by Broadway legends Comden and Green from their original award-winning screenplay in Singin’ in the Rain.  The splash hit captures the waning days of the silent screen era as they give way to new-fangled talkies. The uplifting score includes a downpour of the Golden Era’s most beloved comedy routines and songs, including “Good Morning,” “Make ‘em Laugh,” “Moses Supposes,” and the iconic title song, “Singin’ in the Rain.” It’s a musical that will lift your heart and set your toes tapping – in any weather.

South Bay Musical Theatre proudly celebrates sixty spectacular seasons of Noteworthy Entertainment in Silicon Valley. Join us on the grounds of the Saratoga Civic Center as we sing a selection of songs and salute a soupçon of the 176 shows we’ve staged since our start in the sixties. Enjoy a buffet dinner, refreshments, and dancing followed by a Golden-Age concert in the theater. Bid on unique, theatre-themed auction items, reminisce about favorite past productions, and enjoy the incomparable company of your fellow fun-loving friends who make up SBMT’s fabulous family!

While restrictions show signs of abating, the safety of our community remains our top priority. SBMT will continue to follow all state and local guidelines regarding public gatherings. For the most recent updates to our policies, see our FAQ here. One important change from past practices that we implemented last year and will continue for Season 60: ticket holders are encouraged to stay home if they are not feeling well. Just call the box office and we will exchange or refund your ticket, no questions asked. This refund-for-any-reason policy is designed to keep both our performing community and audiences happy and healthy.